The Elves and The Envious Neighbour - Japanese Folktale 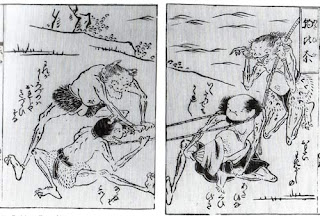 Once upon a time a man was traveling back to his village from a long day at a local market. He was late and unfortunately found himself in the middle of the forest when the sun set.

Being nervous of walking at night, he found a hollow in a big tree by the track and snuggled in for the night. He slept lightly as he was unused to sleeping with the sounds of the night so close and the ground seamed to itch him so that he fidgeted under his kimono.

As time wore on into the blackest part of the night he began to drift into the restful part of dreaming, however just as he was to slip into unconsciousness a noise caught his attention. He thought he had heard a voice. Then he heard another. And then more voices. He was wide awake now and very frightened. "Who could it be carousing through the forest in the middle of the night?" he thought.

He peeped out of the hole in the tree and saw a gang of elves had set up a party next to his tree by the track and were bringing out bottles of sake and food. They danced and sang in the most amusing way and so that after a while he forgot all about his fear and crept out of his hole and took his turn at the sake cup and sang and played with the elves of the forest.

The next morning just before the sun broke the night into day, the elves congratulated the man on his inspired drinking games and for teaching them new songs and dances. Hoping to have him return, and being elves and so by nature tricksters, they took what they thought to be something precious to the man in order to secure his return. What they took however was a big red wen that had been an embarrassing birth mark on his head. The man couldn't believe his luck at being so transformed!

When he arrived in his village, his changed appearance caused quite a deal of interest and soon a large circle of people gathered around his front door to hear his remarkable tale. His neighbour seemed particularly keen and remained to hear the tale told many times. He even asked very particular questions like just exactly which tree he had stopped at and asked if he would be able to judge what time it was that the elves appeared. This was all very curious but after a while everyone went back to their homes and got on with their business. All, except the neighbour that is. He went back to his house and prepared a travel pack. When all was quite, he slipped out of the village and into the forest to find the elves.

Now, why in heaven would he do such a thing? Well, you see he also had a red wen on his head and he thought that if he dined and supped with the elves that they would take his wen too.

He hid in the hollow of the tree that had been described and he waited until the very dead of night. The elves came and began their nightly revel and so, even though he was white with fear, he crept forward taking the sake cup handed to him by one of the frightful elves. In the morning the elves thanked their guest for coming back to play with them. You see, they had mistaken the neighbour for the man of the night before. "Since you have been so good to return to us as you promised, we will return to you the treasure we took last night," said the head elf. The neighbour was at a loss as to what treasure they meant as the man had not mentioned any treasure in his tale, but the neighbour replied he was eager for his treasure to be returned. Suddenly, the elves disappeared as the sun had broken the spell of night and the neighbour found himself confused and alone without the promised treasure, or so he thought. 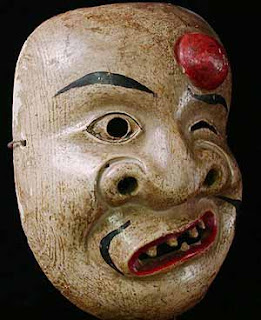 He stumbled back to the village disappointed, with a heavy head and a blurry eye. As he walked passed the people of his village, they all started to stare at him in the most peculiar way and some even started laughing behind their sleeves. "What could all this mean?" he thought. When people began to point at his head and run to get others, he decided to see for himself what was the matter with him. He leaned over the edge of a duck pond that was close by and gasped at what he saw. His wen had grown to twice its size! Now, he knew that the treasure was the wen of his neighbour and the elves had kept their devilish promise. He cried out loud and fled home to his house. He did not come out for a very long time. 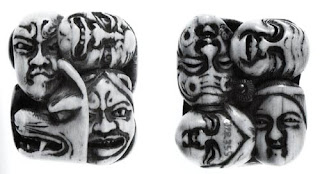 The Elves and The Envious Neighbour has been adapted from the tale of that name from the book, "Tales of Old Japan

This is a very funny story and when I came across the Kyogen mask with the wen (wen is a benign tumor of the skin) I knew I had to adapt this tale for Crackle Mountain.

Image 1: Oni in a tug of War, attributed to Hasegawaw Mitsunobu, from "Toba-e fude byoshi" (Comic Pictures in Rhythmic Brushplay. 1772) Vol. 2. Woodblock printed book, 25.4 x 18 cm. This is image has been scanned from the book "", Edited by Stephen Addiss, George Braziller, New York, 1985, in association with the Spenser Museum of Art, University of Kansas.

Image 2: Japanese Kyogen Mask, from Masks of the World.

Wonderfully told, Florence! Always a pleasure to be on Crackle Mountain.

great florence and i love the images, especially the tiny faces in ivory.

It is a funny story isn't it! I'm glad you've enjoyed it as much as I have.

yikes! that mask is so perfect in so many ways. a memorable story, memorably told. thanks!

Thanks LotusGreen, I couldn't believe it when I found this mask. The koygen play it is used for must be connected to this tale. I hope I will find out if this is right or not.

What an interesting blog this is. I will definitely come back to read more.

Hi, I'm an illustrator and plan to visit Japan in spring next year. If you've been there do you recommend any places/things to see (art related)
thanks
Marek

Hello Florence!
I saw through your blog that you're very connected to Japanese /Chinese art.
I wonder if you can help me! I would like to send you a picture of an old scroll printing, among a few that i have for as long as i can remnenber, and that i don't know nothing about. What do they mean, where they came from, are they chinese or Japanese? etc. would you be so kind to take a look at one of them? How could i send the picture?
Thank you very much

Marek, actually I haven't been to Japan as yet. So I couldn't say. But I personally would like to go to Kyoto.

Miguel, I'm certainly not an expert. You might have a better chance of learning more about your scrolls by going to see your nearest university's Art History department.

Though I must admit to being curious. My contact details can be found at my website www.flyingstartoys.com

Stunning trip, both the artworks and the stories. The fox with nine tails is now a star reborn in Pokemon!
folk art and art
glass

hi!, I have just found this place! cool out man....
I know this story from Ireland. differance being that the elves are so pleased with the mans song they take a hump from his back and they know it he doesn't want it. The next night the neighbour returns and he is terrible dour fellow who can't sing or dance and the elves are so annoyed at him they give him the hump from the first night so he ends up with two humps!!

Florence, I have stumbled on your remarkable blog quite by good fortune, I believe. I find your story telling fascinating...I have you favored among blogs and will return eagerly soon...Dee Dee

PLEASE
CAN YOU ENTER IN MY BLOG
BECAUSE I WANT ENTER DESPITE
A LOT OF PERSONS FROM YOUR
COUNTRY BECAUSE IS MY FAVOURITE.
I AM FROM GREECE AND WRITE
GREEK FOR THIS I HAVE PUT
IN LEFT A TRANSLATOR,ALSO
YOUR BLOG THEY IS VERY NICE
AND HAVE PERFECT SUMJECT.
I HOPE YOU ENTER IN MY BLOG
THAT YOU NAME
http://lefobserver.blogspot.com

Isn't this amazing? I was looking through the top craft blogs list and I came across one I thought looked interesting and it turned out to be FF! Hello. I love the tale(especially as I have some little wens I would dearly love to be rid of! I think they are moles actually)

Nice blog as for me. It would be great to read more about that matter. Thanx for sharing that data.
Sexy Lady
Escorts UK

Thank you for giving me a chance to take a peek into the wonderful world of Japanese Folk tales. You are quite a diligent chronicler. I have added you to my Favourite blog list. Do take a peek at: zainaanwar.blogspot.com
Thank you.

Loved this story,
and all things ancient japanese....
was inspired by this to create
The Druuids Dream at Crackle Mountain video,
please enjoy in HD
http://www.youtube.com/watch?v=JH-_wjT43MU

Envision all the suggestive games that you can complete in all out closeness with a t-young lady or prostitutes and single ladies from Kolkata .
mountabu escorts
kalimpong escorts
darjeeling escorts
malda escorts
nadia escorts