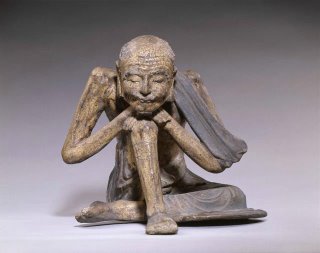 The old poet sat alone by the light of his lamp. It was a beautiful, clear, full moon night of the seventh month. The stars twinkled brightly upon the indigo sky, the cicala whirred and the frogs sang to each other in courtship across the pond. Though the flowers of night lulled all creatures with their sweet scent, the poet was concerned, for hundreds of little moths flung themselves upon his flame; nor was it only the moths but also the brilliant dragonflies and cockchafers that brought themselves towards the flame on the Fire Quest. But all in vain - each one, as it sort its prize, was burnt and so died.

Scooping them up, he let out a deep sigh and spoke to those still spinning near his lamp, "Little ones it saddens me so to see you perish by my side. Will not any of you leave off the Fire Quest? "
He leaned in towards them to inquire, but they gave him no notice.
"The Fire Quest was begun so long ago, perhaps you have forgotten its meaning. Listen and I will remind you: 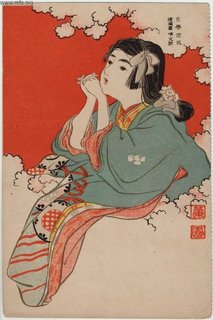 "Long ago, on a night much like this one, there lived the Firefly Queen. She was the most beautiful of all the little creatures of the air. Her rosy palace was the magnificent Lotus of the Lake. Bright was her palace and as it nodded above the water it was like a star reflected in its mirror.

"To this star all the creatures of the air came to win the hand of the Firefly Queen. Their passion drove them to her and nothing could persuade them to depart. 'Please have pity on us, Queen of the Stars, Brightess Flame of the Lake,' they cried. However, the Firefly Queen, not being sensible to her powers of love, was perplexed by the swarm that crowded by her palace. She gave them no answer, but still the suitors sent petitions of their love.

"After seeking advice, she finally appeared before her admirers; in a swoon they listened to her proclamation. 'You suitors who seek my hand,' she spoke. 'Shall prove to me thy love by bringing to me the Light of Fire.' From within the palace could be heard the sounds of laughter. Why laughter? I will tell you soon enough. But the Queen had spoken, oh the foolish little ones, they left the Lotus Palace in search of the Light of Fire, and it became known as the Fire Quest. 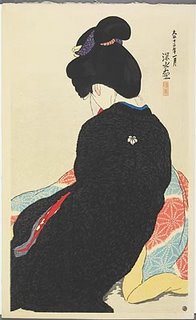 "Flung out into the night, driven by their desires, they flew. Taking the fast currents of the air they found openings in lattice opened with the warm weather. Seeking the Light of Fire they flew into the chamber of a young girl in tears, a love letter opened upon her pillow. Onwards they flew and found another sitting at a mirror, holding up a lamp as she painted her face. The powered, white wings of a moth put out her flame.'Oh! The terrible dark!' Exclaimed the woman in shock and surprise.

"In other place an old man lay dying. 'Light the lamp for me, the night has come and I cannot see.' He tried raising himself in bed but his family helped him back to his pillow. 'The lamp has been lit for some time, Father. By your bed it stands and the enumerable moths and dragonflies that fly around it are making quite a din.' The dying man sort his son's hand and whispered, 'I know nothing at all.' 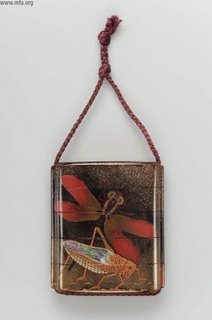 "The next morning all those who had flown on the Fire Quest where swept away. All had burnt their wings upon the flame and died.

"The Firefly Queen lay safe in her lotus, wrapped in the arms of her beloved. He had already won the Fire Quest, for he was the Lord of the Fireflies and so carried the Light of Fire within his body - never to be burned by its light. It was he, who had concocted the vain plan to send the suitors away upon the Fire Quest, and he who had laughed that night when it all began. 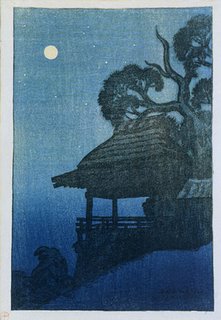 "So you see, my little delicate friends of the air, you have been deceived. Your love of the Firefly Queen may be unquenchable but no longer need you seek the Light of Fire."

But the Dragonflies and the cockchafers and the moths still swung wildly about his lamp, heeding not the sage advice of the poet. One by one they grasped the flame in fulfillment of the Quest and fell dead upon the floor.

The wise poet sighed again at their folly, and blew out his lamp. "I will sit in the dark," he said; "it is all I can do." 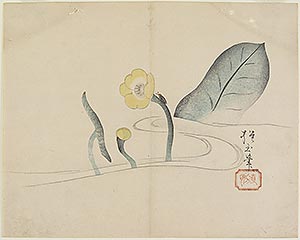 The Fire Quest has been adapted from the book Green Willow and other Japanese Fairy Tales, by Grace James, Macmillan, London, 1979. (first published 1923).

The translation of this story in Green Willow is very charming. It touched my heart when I read it. While I couldn't keep much of the quaint language the Green Willow adaption uses, I did decide to keep the word "cockchafers" instead of the modern cockroach. I liked the word cockchafer better as, apart from its poetic sound, it reminds one that all insects are worthy beings even ones that make us cringe.

The first picture is not a picture of a scholar or poet and is not of Japanese origin. It is a Chinese sculpture of a Lohan - a person who has obtained a level of spiritual attainment similar to that of a bodhisattva. When I came across this sculpture he immediately conveyed a sense of thoughtfulness and compassion and I knew I had found my 'poet'. A link for more detail on the piece will follow in the images section.

Interestingly, the humble picture that begins the details section was the reason for my choosing this tale. Its called Lotus and a Gold Bug and that tiny black bug climbing the flowers stem is the Gold Bug or firefly as we know it. I was surprised to learn that this is how a firefly looks. Oh! That this little thing had caused such a stir....it is always the way.

5. Eight Views of Omi: Ishiyamadera -1917, Ito Shinsui (1898 - 1972). Aiban tate-e, 31.5 x 22 cm. I found this image at Scholten Japanese Art in their online gallery exhibition. If you click on the link for the image, go to the 'continue to the exhibition' section then click forward 3 images and it is the fourth. This is a selling site, nice looking with high quality work. The Gallery appears in a pop up window that I couldn't link to directly.

Really? there are no comments on this blog yet? Well let me be the first. This is your most beautiful work yet Florence. Nicely researched, and nicely reproduced. I was there among the moths.

A beautiful story that is full of charm. It is excellent, with great images. I agree that 'cockchafer' sounds so much better.

beautiful and meticulous as always. I'm thinking of the one or 2 hot nights in summer when all the termites swarm suicidally into our lit up lantern house- landing in food, drink, clothing. To what purpose I do not know as they cannot set up a colony without a queen in an earth nest.

Any more stories in the wings? I enjoyed the fire quest. Hope you and the wrecker funned it up at Sandgate.

I'm having a small holiday at present and soon will be asking the internal lamp to guide me to the next artwork of inspiration that will spark the choice for the next tale.

Great story you got here. It would be great to read more about this theme. Thanx for posting this information.
Sexy Lady
Russian Escorts

I am happy to find this post very useful for me, as it contains lot of information. I always prefer to read the quality content and this thing I found in you post. Thanks for sharing

I want to start by telling you that you have to be a very dedicated person with a full driving force to Websites for sale present in detail the program that you did. It was a great session and beautifully presented Turnkey Websites . Again, thank you for your presentation and my undying respect.

I applaud your professionalism, dedication and integrity. Thank you very much indeed for this post.