The Ancestor of Tea - Chinese Folktale

Nestled in the high mountains sits the village of Dragon Well, once it was but a poor and isolated place.

In the poorest part of this poor village lived an old woman, all alone, a widow of many years and without sons or daughters to care for her. But she was of a good heart, and every day she would tend her scrawny tea bushes in memory of her husband even though the other villages would laugh at her folly - for her tea was bitter. "Old Wife's Tea" they called it, and to this day in China, poor quality tea is named so.

And so it was that one New Year's Eve night, in the middle of a harsh winter, as the old woman shuffled about the stove preparing her meager tea as an offering to her ancestors, there came a knocking at the door.

"What a dreadful night to be out in the cold, " the old woman said when she beheld a shivering man in her doorway, "Please come in, sit down and have some tea."
The strange man showed much thanks and took in his hand the warm cup of tea.
"I'm afraid my tea is not very good but it is all I have," the old woman explained as she worried over the guests needs.
"Why is that? You are a weathy woman," laughed her guest as he drank down the tea.
"Wealthy? You shouldn't play with an old woman like that sir, how can I be wealthy?" 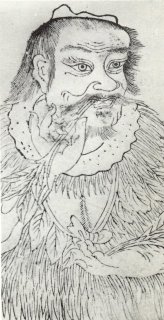 "Outside your door is something of great wealth, and if you don't want it, I'd gladly pay for it."
The old woman went to the door and peeked outside, the old bench and table were there and the old millstone mortar full of years of cooking scraps and rubbish. "I don't see what he could mean," she thought.
The strange man on his way out pointed to the millstone mortar, "That is worth more than you could dream."
The old woman told him that he could have it, but the man refused to take it for nothing and promised to come back the following night to collect and pay for it.

The next morning the old woman went out to look at the mortar, and was so ashamed of its appearance she thought she would clean it up. She dug out the rubbish and spread it under her tea bushes, then she drew water from the well and washed the mortar, also pooring the muddied water under her tea bushes. When she was finished she was happy to think that her strange guest of the following evening would be pleasantly surprised.

That evening the stranger knocked on her door again. But this time the knock was much louder and more insistant. It was her guest of the night before and he was wanting to know what had happen to the treasure he came for. The old woman was perplexed and coming outside showed him the newly cleaned mortar. 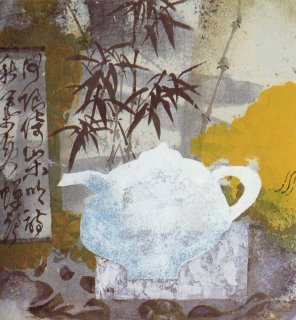 "No," said the strange man (with just a hint of a twinkle in his eye), "That wasn't the treasure at all." So saying he turned and left never to be seen of in the village again.

That spring a wonderful thing happen. The old woman's tea bushes grew lush and tender leaves. The tea was so frangrant and lovely that all the villages wanted to share in her tea. She gladly gave them cuttings and seed. So all the tea bushes in Dragon Well were eventually planted from those bushes. The tea became famous through-out the land and instead of being called "Old wife's Tea" it coined a new name called "The Ancestor of Tea". 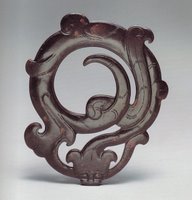 I first heard a version this story on a documentary called "Robert Fortune: The Tea Thief" about the man who was sent into China by the British government to discover the secret of tea. The British were fawking over so much silver bullion for the stuff they had to find an alternative supply. Robert Fortune was a botanist not really the espionage type, but off he went in service to his country into the very heart of China. How did an English man get around China? Well, I encourage you to see the documentary. But it tells of how he comes to the village of Dragon Well and he is told the story of the old woman and the tea bushes. Not only did he have to discover how tea was processed, both green and black, but as a botanist he had find out what it was about the plants that made them special. He found that the tea bushes were all the same variety but that the taste of the tea depended on where the bushes were planted and what they were feed. He discovered, like the old woman in the tale, that it was the nutrience that made the tea taste good.

In the stories the man who comes to the door part is always a little different as is the case with storytelling. I've been reading Chinese tales for some time and have been reading "The Journey West" by Wu Cheng'en of the Ming Dynasty - "a mythological novel based on many centuries of popular tradition, put into its present form in the 1570s", known to most of us by the popular TV series Monkey. From these readings I have become used to the 'figure who appears to help out' usually some deity or demon. I was looking through my books for pictures to include for this tale when I stumbled upon the man pictured above. He is the ox-headed divine farmer Shen-nung, second of the Three Sovereigns, who taught the arts of agriculture as well as the use of herbal drugs. I immediately blinked, this would seem to be the perfect deity to pop in unexpectedly and generously teach the secrets of tea. Very serendipidous.

I wish to dedicate this story to my friend Rebecca Ward, because she's a composter from way back, maybe even from past lives.

*The Ancestor of Tea was based on the version found in the book, Folk Tales of the West Lake adapted by Wang Hui-Ming, Foreign Language Press, Beijing, 1982.

As a compostafarian, I approve of this tale although find it a shame that the compost enriched tea was not strong and powerful enough to overturn the sexist/ageist paradigm and still be named 'old wife's tea' for all of its greatness! My english grandmother, nearly 90 and a widow for the last 45 years makes the best tea I know in her silver teapot. Tea with Granny can go on for most of the afternoon!

Dear Compostafarian,
You should read the last part of the tale again, then you will find that the famous Dragon Well Tea is now know as "Ancestor of Tea" as the tale's name suggests. However, I agree with you that the slur on Old Wives is truely dire, and is now only a quaint anachronism. Please apologize to your Gran for me.

That painting of the tea pot is very beautiful! All the illustrations are so inspiring.

HI Florence...wonder if u are still there on the other side. I was interested to know more about the folktales and the research that can be taken on folktales of a culture. I m doing my MA in English from Delhi University and come from Darjeeling. I plan to do my further research on tea folklore if i get in MPhil. since I belong to Darjeeling which is famous for tea all over the world, I wish to carry a research if the faculty accepts my research proposal on tea folk lore and folk tales that have been circulating in the tea gardens in Darjeeling Hills. If you are aware of any such research programs done on folktales and folklore (not necessarily on Darjeeling tea folklores) or could add to my idea of a possible research on tea folk tales and folk lores then please do send me something. my e mail id is gaarimaa@yahoo.co.in take care!

nice posting.. thanks for sharing.