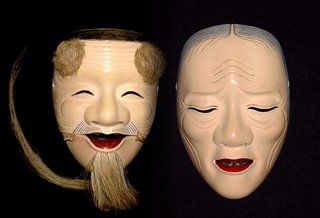 Once upon a time there lived an old woodcutter and his wife, and their beloved pet Hare. They were poor but managed a simple and happy existance by living close to the deep forest where the old man collected wood.

Everyday the gentle woodcutter would leave food out for the Hare's breakfast before the woodcutter went off to work. One morning along came a mischievous Tanuki, who was passing though the neighbourhood. Seeing this yummy food, he fell to eating it until not a morsel remained for the Hare.

"Hey! You there! That's not for you," cried the woodcutter spying the thief. He snatched up the Tanuki, bound his legs and hung him from a high beam. Thinking that it was now late, the old man picked up his basket and hurried off into the forrest to collect the wood that kept body and soul together.

Now, this was not the kind of treatment the Tanuki was used to. Inside he was very, very mad, but Tanuki are very sneaky and so when the old woman came outside to start cooking the evening meal the crafty Tanuki, wept and sighed. The old woman was moved by his tears and with a tender heart cut the Tanuki down and freed him from his bonds. You might have thought that one would be grateful, but no! The Tanuki was as spiteful as snake's blood and to revenge himself upon the old man, he knocked the old woman on the head when her back was turned. He skinned her and cooked her up in the cooking pot!!!

When the dear old woodcutter returned there stood his beloved wife with a steaming bowl of stew ready for him on the table, yum. He was very hungry from working all day without lunch. He slurped down the very tasty stew, licked his lips and praised his wife for such a delicious meal. But to his surprise his wife's shape began to shimmer - blinking, he saw to his horror that it wasn't his wife at all, but that wretched Tanuki! Ah, what had happen to his wife? The Tanuki was laughing and pointing at the soup. "Old man," he squealed, "you ate her up, you ate your wife!" The old man reeling backwards fell from his seat and fainted into unconsciousness.

Oh, what a rotten Tanuki this was.

The Hare had come home late from a visit to his relatives and had entered the house just in time to see this monsterous scene. Hanging back in the shadows to avoid being seen, the Hare resolved to revenge his family. He followed the Tanuki for days, studying his habits and ways. And, being quite clever himself, hatched a cunning plan to become the Tanuki's traveling companion.

One day when the Tanuki had gathered on his back some firewood for cooking, the Hare secretly set it alight. The kindling cracked and popped as it started to burn. "My word!", exclaimed the Tanuki, "what's that sharp sound?" To this, "Oh!" answered the Hare, "this is called Crackle Mountain. There is always this noise here." Much comforted by his friend's explaination the Tanuki walked on, curiously listening to the hissing and crackling. All of a sudden the Tanuki's back got very hot and, "Owieeeee!!!" he yelled. His back was burning, his fur smoked and his skin was blacked and curled. The Hare had got his first taste of revenge.

The Tanuki was very badly injured and so the pair holed up for a while in a small cave. The Hare played the part of the caring friend and promised the Tanuki a special poultice that would easy his pain. The hare left for a near by village to get supplies for the poultice. When he return he was carrying a red bag ready to be applied to the raw flesh of the wounded Tanuki. Desparate to relieve his pain the Tanuki grabbed the bag out of Hare's paw and quickly layed it on his own back. "Ahooooooiiiiiieeeeee!" cried the Tanuki. The Hare had filled the bag with Cayenne pepper to trick his hated companion. 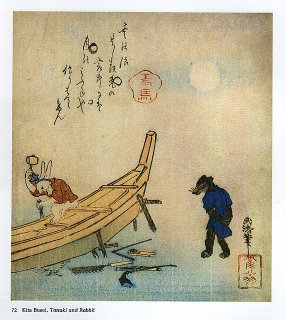 After this the Hare moved down to the seaside, which was close by the cave, until the Tanuki recovered. After many months of pain and suffering the Tanuki was well enough to leave the cave. He wandered down to the water's edge to complain to his friend for mixing up the poultice with pepper, when he noticed that Hare was building a boat. "Where are you going with that," he asked the Hare. "I'm building this boat to row to the City on the Moon." The greedy Tanuki had heard of the wounderous City on the Moon and his eyes grew feverishly round. "I too will build a boat to row to the City on the Moon." And so the Tanuki fashioned a boat for himself, however, being unskilled in carpentry as the clever Hare was, he moulded his boat out of the clay he dug from the cave.

When the boats were completed and the tide swelled with the night of the full moon, the Hare and the Tanuki lauched 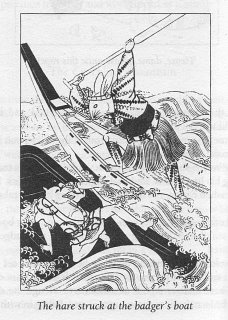 themselves upon the waves. The Hare pulled on his oars, and the Tanuki strained with all his muscle against the sea. Their boats shot out into the deep waters, where the loud groans of the gaint Sea Dragons could be heard in their underwater palaces. It was here, were the water was blackest, that the Tanuki's clay boat begun to break and crumble. "Help me!" pleaded the Tanuki, "Help me Friend!" But the Hare had a stern look in his eye. "Help me!" cried the Tanuki again, clawing the side of the boat trying to grab hold of Hare's oar. The Hare snatched it away and brought it down hard upon the clay boat, smashing it with a single blow. The terrified Tanuki fell backwards with a crash, and plunged into the water with the remains of his boat. The cold sea swallowed him up and his malefic spirit was chained to the bottom of the ocean by the Dragon's scaley minions.

The Hare having lost the family he loved rowed on towards the City on the Moon. 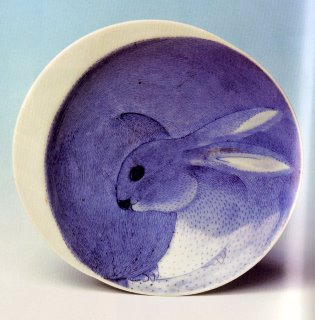 Tanuki is a raccoon-like dog often mistakenly referred to as a badger. The Tanuki is a trickster spirit from Japanese folklore - often mischievous but can sometimes be helpful.

Omigoodness. Itchy and Scratchy were never this cold-blooded and vengeful. Now I know why they don't let you keep rabbits in Queensland. Book me in for therapy! I haven't felt like this since reading "The Stars' Tennis Balls" by Stephen Fry.

Hi Bec, I had no idea Stephan Fry was so intense..but in a good way:) Folktales and fairystories, as some call them, are often very dramatic in their themes. Its an often over looked feature because they are often writen very plainly. I've fleshed it out a bit in my version, but still with much restraint. sweet dreams!

MB you should watch your language! But yes, he really was a ##@**!!. The Hare, forlorn, went to live on the moon, one Tanuki must have been enough.

I am bereft of knowledge regarding folktales, so please excuse any possible simplistic ideas question/s etc..

What is your take on the status of contemporary folktale making?

Is it possible for folk tales to be still made, considering that the original conditions out of which folk lore thrives, (i.e, i presume an agrarian subsistence culture) no longer exist, e.g in advanced industrial societies?
Or maybe, one's perceptions about what a folktale is, need to be redefined, is it a style? are there certain themes?
Folk lore it seems, derives it source from 1. the immdediate environemnt, 2. natural and socio-historical. But also seems to be 3. indigenous somewhat, dealing with classical truths revealed through s great deal of observation of those above factors.

The basis for my query is that, i perceive that an industrialized society like Australia with a young history, a history developed after the Scientific Enlightenment and the industrial revolution has problems reconciling those above three factors adequately.

Anyway, looking forward to your indepth response on that.

Hi, Florence, I was pleased that you enjoyed "Lily," in my Chinese Anthology. Too little attention is given to Pu Sung Ling. Glad to see that you are correcting the imbalance a little with your Blog. Have you checked out Faubion Bowers and his translations and considerable writings on things Japanese, as well as his fascinating insights into NOH theatre.
Good luck with your work in the arts.
Raymond van Over
rvox@starpower.net

Thankyou all for your much treasured comments.

I haven't not been able to translate the romaji comment from Sanjuro Higashiki. If anyone could help me there it would be greatly appreciated.

Shane, I think on those very questions everyday and those answers are the ones I am seeking in both thought and in practice. I may in time be able to present some of my thoughts on them in my behind the scenes blog Windbagandthunder, (link in the side bar) Thankyou for your support and comments there too :)

Raymond Van Over, a great honour to have your comment here. Your book, "Smearing the Ghost's Face With Ink" is one of my favourites. I agree that Pu Sung-ling's work should be more widely know about.

Also,your tips on the writer Faubion Bowers will be very useful.

What everyone's fighting for. said...

It is vengeful and cold hearted, but is it that different from witches who grind up kids to make bread. Or fatten them up for dinner or pied pipers who wipe out an enter generation of one kingdom.