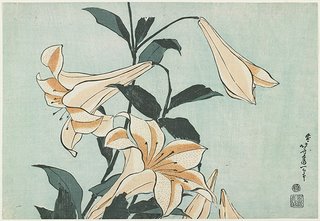 Once there lived a gentleman by the name of Tou Hsun who lived in Chiao-chou, he was known to be a kindly man with an extraordinary love of flowers. One day after spending a few hours tending his beloved garden he lay down for an afternoon nap. It was but a moment after when there, beside his bed, stood a man in serge clothing beckoning to him as with some urgent communication.

The fellow had a friendly look and so Tou asked, "Who is it that summons me?"

"Please Sir," the servant begged. "My Master wishes to meet you, he's not far off."
Intrigued, Tou agreed and went with the servant. It was not long until they came to a bustling town of white houses. They were all built closely together and had the strangest doors, unlike anything he had seen or read about. Tou was enchanted by the beautiful place - planted out with flowers of many variety and Lemon groves. Truly this was a blessed place he thought.

The people he passed all smiled and called out hello as if they had been expecting him. When he reached the gates of the palace a mandarin met them and bowed in greeting.
"The Prince will be very happy to hear you have come, he has long wanted to make your acquaintance," smiled the mandarin.
Tou smiled back holding his sleeve up to cover his reddening cheeks. "That's very kind of you to say, but I feel at a loss, as I do not know who your Prince is?"
"You will met him shortly and see for yourself." 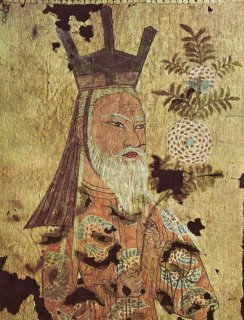 Two girls will red flower banners came forward and escorted them to the Throne room. There Tou saw a sage Prince of dignified and handsome countenance. Above, on a scroll, was written The Cassia Court.

The Prince's eyes lit up at seeing his guest, and quite unexpected came down to greet Tou Hsun saying, "There is a deep bond between us, being neighbours as it were, I am honoured that you have chosen to come to us. Please let us put aside any suspicions and feast your arrival."

Tou was so amazed by this grand treatment that he could only nod as he was led to the place of honour by the Prince's side. After the drinking cup had passed many times the Prince called to his court, "let us set a couplet to memorialise this special occasion, I offer to begin: Genius seeks the Cassia Court."

The courtiers all sat for a moment composing an antithesis when Tou offered, "Refinement loves the Lily flower." The Prince looked exceedingly pleased and all the courtiers agreed that is was a most fitting reply.
"How strange you should mention the Lily! I have a daughter named Lily and you shall meet her." 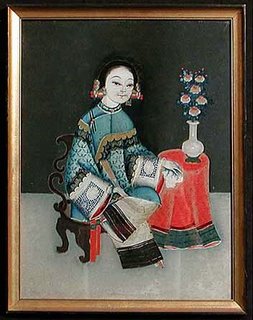 Very soon a tinkling of hair ornaments was heard as the Princess was escorted gently into the hall. There came a fragrance of flowers such as only breathes upon the first spring nights. Tou was already intoxicated by her, but when she appeared all else seemed to slip away and he was entranced by the delicate vision before him. As if a cloud came over him he became faint, the last thing he heard was the voice of the Prince speaking of looking for a suitable consort for the Princess, before darkness came to him...And then, a light.

He woke from his summer bed to find he had slept through the night. The morning sun was already rosy and the insects had begun there morning songs. Tou, sat up, he felt his heart was breaking to be torn away from Princess Lily. Though he knew it was only a strange dream, he could smell her perfume in the folds of his clothes. He got up and went out into his garden and stared longingly at the lilies that grew there.

One night after a party at his neighbour's he fell to sleep with a very heavy head. When in walked an official from the Cassia Court announcing that Tou Hsun was invited for another visit with the Prince. Tou jumped up and quickly made his way to the palace with his guide. Upon being given entrance to the Throne room he bowed low to the floor and thanked the Prince for being able to return. The Prince raised him and said, "It has become known to me that you would be in favour of a marriage to my daughter. If this is so we will arrange for the marriage banquet at once."

Tou was overjoyed his one true wish would be fulfilled. A merry feast was had by all and in the morning when Tou awoke to find himself still in the marriage chamber he jumped out of bed and squeezed his treasured wife around the waist while she was at her mirror.
"Oh!" She cried sweetly, "What has come over you."
"I'm just so happy to be here with you I thought it might be but a dream," he laughed.
But their joy was cut short when a summons arrived for the Princess and Tou to come to the Throne room.

"I'm very sorry to interrupt the two of you but an urgent dispatch has arrived and I'm afraid disaster has struck our kingdom, " said the Prince, the picture of concern. He handed the dispatch to Tou to read. It read as follows:

'The Grand Secretary of State, Black Wings, to His Royal Highness, announcing the arrival of an extraordinary monster, and advising the immediate removal of the Court in order to preserve the vitality of the empire.

A report has just been received from the officer in charge of the Yellow Gate stating that, ever since the 6th of the 5th moon, a huge monster, 10 000 feet in length has been lying coiled outside the entrance to the palace, and that it has already devoured 13, 800 and odd of your Highness's subjects, and is spreading desolation far and wide.

On receipt of this information your servant proceeded to make a reconnaissance, and there beheld a venomous reptile with a head as big as a mountain and eyes like vast sheets of water. Every time it raised its head, whole buildings disappeared down its throat; and, on stretching itself out, walls and houses were alike laid in ruins. In all antiquity there is no record of such a sourge. The fate of our temples and ancestral halls is now a mere question of hours; we therefore pray Your Royal Highness to depart at once with the Royal Family and seek somewhere else a happier abode.'*

Tou felt his heart freeze with horror but with never a moment to speak, a courtier rushed in screaming, "The monster is here!"
The Royal Household fell to crying. The Princess clung to Tou, "Don't desert us, dear husband, there must be somewhere we can go!"
"You are all most welcome to find refuge at my humble home, though it is no palace, " said Tou supporting the Princess in his arms.
"There is no need to fuss about such things at a time like this," said the Prince. "Take us there before it is too late." 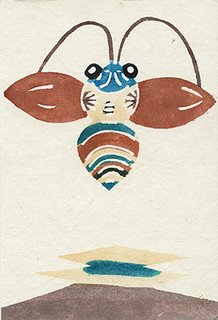 With a whoosh of light and wind Tou found himself and the Royal Household in his old garden. The Prince proclaimed it most pleasant. The Princess much relieved looked up to her husband and said, "Now you must furnish it so that we can continue in the old way." But before he could offer an answer he woke cold and wet in the morning dew of his own garden. He got to his feet and heard a familiar buzzing sound, looking down at his clothes he saw a little bee and not far from that one bee another few bees. Try as he might to shoo them away they would not go.

He ran to his neighbour and described to him the dreams and showed him the bees.
"I suppose you should get a hive for the bees," chuckled his bemused friend.

Tou had a hive constructed that very day and no sooner was it finished the bees flew from his clothes into the hive. Tou heard a loud buzzing behind him, he turned to see a swam of bees fly over the fence and into his newly built hive. He ran next door to tell his doubting friend what had happened. His neighbour then agreed to go with Tou and find where the bees had come from.

After asking around they learned of a very old man who had been keeping the bees for over thirty years. They went to see the old man and told him of the remarkable happenings. The old man strangely did not doubt the remarkable story and went to inspect his hive. They found all the bees had gone. Breaking it open they found a huge snake that measured about 10 feet in length. They at once recognised it as the monster that had attacked The Cassia Court. They seized it and the old man cut it in two.

As for the bees, the understanding old man allowed them to remained with Tou Hsun. The honey from the hive of Princess Lily had the sweetest honey and the grateful bees filled his garden with many more rich hives as the years passed.

The Princess Lily is originally by P'u Sung-ling (Ch'ing Dynasty) from his book Liao Chai Chih I. The Liao Chai (as it is informally known) consists of 431 short tales that P'u Sung-ling collected over many years from the folktales of the common people and storytellers of China. He rewrote them with sublty and imagination that has aided the endearing qualitiy of these stories.

I've sourced this tale from the book, Smearing the Ghost's Face With Ink: A Chinese Anthology, editor Raymond Van Over, Picador, London, 1973.

The translation, in the book mentioned above, is originally by Herbert Giles, or a derivative thereof.

* The section marked with the star* is a direct quotation from Smearing the Ghost's Face with Ink. I made the decision to quote directly rather than rework the dispatch due to the fascinating footnote that states the dispatch's form closely mimics the style of offical Government documents.

3. Young Ladies Seated at a Table, one half of an attached pair of glass paintings. Qing Dynasty, 19th Century. Found on the website L'Assie Exotique

4. Folk Toys, Keisuke Serizawa (Shizuoka, Japan, 1895 - 1984), c. 1970, Original Hand-Stenciled Dye Print (Kataezome). This image found at http://www.artoftheprint.com/artistpages/keisuke_serizawa_folktoys.htm (this site does not seem to work when linked to, however, it will work if the URI is copied and pasted). It was this image that inspired me to adapt The Princess Lily for Crackle Mountain.

Finally, I'd like to dedicate this story to my mum because she loves beehives too.

A wonderful Chinese story, Florence, that was beautifully put together. Well done.

Beautiful tale from the hive. Strange things can happen in the garden!

I'm glad you liked the story.

mb, I did look but found none that fit the series as a whole, if I had continued to look I may never had published this story. Maybe I'll find something that will suit eventually, or maybe not.